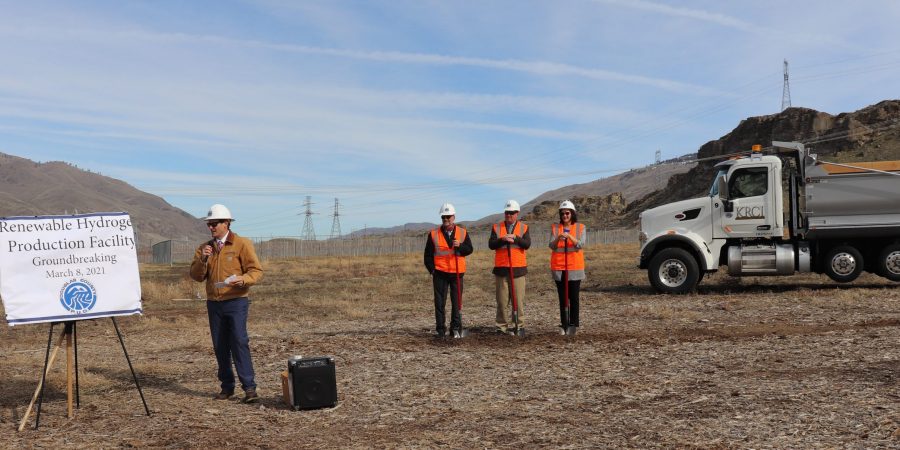 How will natural gas infrastructure advance the goal of clean energy in the Pacific Northwest? One of the most promising new technologies is called Renewable Hydrogen.

Renewable Hydrogen – or “green” hydrogen – is created by utilizing excess wind, solar or hydroelectric power to separate water molecules into hydrogen and oxygen. This process, called electrolysis, then delivers hydrogen into natural gas pipelines and releases the oxygen into the air. Renewable Hydrogen acts just like battery storage for excess renewable electricity. It captures the excess power so we can use it when the wind isn’t blowing and the sun isn’t shining, and it helps balance energy need with energy supply.

Europe has embraced Renewable Hydrogen as a key component to advancing its goal of eliminating carbon emissions, but it has been slow to catch on in the U.S. Until now. The Biden Administration has committed billions in new Research & Development funds to advance Renewable Hydrogen and projects are starting to be developed right here in our own backyard.

In Washington, Douglas County PUD broke ground on March 8, 2021, on a new Renewable Hydrogen pilot project near Baker Flats, East Wenatchee, that will support their Wells Hydroelectric Project. This project was made possible through SB 5588, bipartisan legislation that passed the Washington State Legislature in 2019 and was signed by Gov. Jay Inslee. Also in Washington, Puget Sound Energy will be conducting a series of pilot projects at their Georgetown Training Facility. Teams will perform a series of tests using different hydrogen/natural gas blends and test the system for leaks, air quality after combustion, gas quality and impact on the appliances used.

In Oregon, NW Natural, Eugene Water & Electric Board (EWEB) and Bonneville Environmental Foundation signed an agreement in October of 2020 to collaborate on a proposed Renewable Hydrogen plant in Eugene. With the growth of wind and solar generation, along with existing hydroelectric generation, EWEB says it periodically has an abundance of renewable electricity available that can be used to produce hydrogen that can be stored for months or even years in existing natural gas infrastructure. Last year, NW Natural began testing a 5% hydrogen blend of natural gas to evaluate impacts on the system and end-use equipment performance at its Sherwood Operations and Training Center. In 2021, they are expanding blend testing to include additional end use equipment performance on furnaces, fireplaces and water heaters.

The 75,000 miles of existing natural gas infrastructure is a vital component to delivering clean energy in the future. As we’ve learned in the Pacific Northwest recently, having the electricity go out in a storm can be made more bearable with a reliable natural gas system that allows us to continue to heat our homes and cook for our families.

Countries around the world are embracing Renewable Hydrogen as a key component of their carbon emissions goals. By preserving and expanding our own natural gas infrastructure here in the Pacific Northwest, we can ensure we have clean, reliable power in the future.